Mark Caulfield graduated in Medicine in 1984 from the London Hospital Medical College and trained in Clinical Pharmacology at St Bartholomew’s Hospital where he developed a research programme in molecular genetics of hypertension, which has discovered over 1000 gene loci for blood pressure. He served on the NICE Guideline Group for hypertension and was President of the British Hypertension Society (2009-2011).
He was appointed Director of the William Harvey Research Institute in 2002 and was elected a Fellow of the Academy of Medical Sciences in 2008. He led on fundraising towards the £25m William Harvey Heart Centre which created a translational clinical research centre. Since 2008 he directs the National Institute for Health Research Cardiovascular Biomedical Research Unit and Centre at Barts. Between 2010 and 2015 he co-led the merger of three hospitals in North London to create the new £400 million Barts Heart Centre which provides 80,000 cardiovascular patient episodes.
He has won the Lily Prize of the British Pharmacology Society, the Bjorn Folkow Award of the European Society of Hypertension 2016 and the Franz Volhard Award of the International Society of Hypertension in 2018.
In 2013 he became an NIHR Senior Investigator and was appointed as the Chief Scientist for Genomics England (100,000 Genomes Project).  He was appointed Interim Chief Executive Officer for Genomics England from January to September 2019.  Sir Mark was awarded a Knighthood in the June 2019 Queen’s Birthday Honours List for services to the 100,000 Genomes Project. 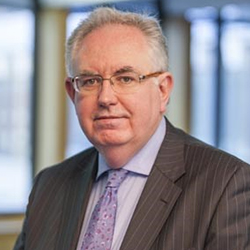