Guillaume Canaud is a MD, PhD working at hôpital Necker Enfants Malades (Paris). He did his medical school in Montpellier and moved to Paris in 2002 to perform his Residency in Nephrology (2002 to 2007). He became Senior Resident in the Renal Division of Necker (Prof. Legendre) from 2007 to 2012. Concurrently, he spent four years from to 2008 to 2012 in the laboratory of Dr. Fabiola Terzi (INSERM U1151, Necker Hospital) to achieve his PhD degree in molecular and cellular biology. Then, he joined the Joseph Bonventre’s Laboratory (Harvard Medical School, Boston, USA) from 2012 to 2014 to achieve a postdoc. He came back to Christophe Legendre’s team with a Faculty position (Associate Professor) and built his own group of research dedicated to translational medicine. He obtained an European Research Council starting grant (2015) for his kidney research project, an ERC Proof of Concept Grant for his translational research (2016) and an ERC Consolidator (2020) dedicated to the understanding of PIK3CA related disorders. Guillaume is now full professor at the Université Paris Cité /Hôpital Necker Enfants Malades and is working specifically on rare disorders involving the RAS/PIK3CA/AKT/mTOR pathways.

Very recently, Guillaume and his group, identified and reported in Nature a very promising therapeutic for patients with a rare genetic disorder called PIK3CA-Related Overgrowth Syndrome (PROS). Guillaume and his group pushed the clinical development of this drug for patient with PROS. Three clinical trials were launched since 2019 and led to the US FDA accelerated approval on April 6th 2022 of alpelisib for patients with PROS aged of at least 2 years old.

He published as a first or last author in top leading medical and scientific journals such as Nature, The New England Journal of Medicine, Nature Medicine, Science Translational Medicine or Proceedings of the National Academy of Sciences USA. He received several awards including the 2018 Prize Jean Lecocq of the French Academy of Sciences, the 2019 Prize Eloi Collery of the French Academy of Medicine, the 2019 Ville de Paris Jean Hamburger Prize, the 2021 Unsolicited International Triennial Gagna A. & Ch. Van Heck Prize for Incurable Diseases and the 2022 Robert Schobinger Award from the International Society for the Study of Vascular Anomalies. 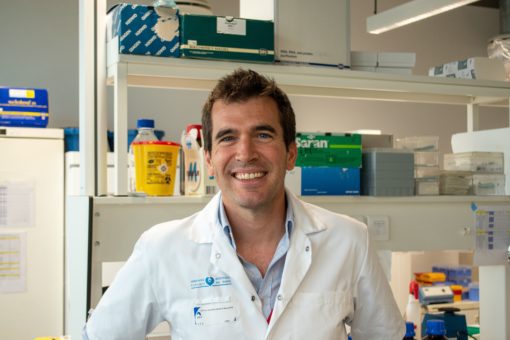