Over the past three days, more than 300 experts from around the world attended the RE(ACT) Congress in Basel to discuss research into rare diseases and the development of orphan drugs. The event demonstrated that progress is being made.

Rare diseases have long been seen as the orphan child of medicine: low levels of interest, little research and few active substances. The RE(ACT) Congress proved that the orphan has now grown up. Research, industry and policymakers have all recognized the significance of these diseases and the challenges facing patients. In Switzerland as in other countries, there has been a huge transformation over the past ten years.

Speaking at the opening event of the RE(ACT) Congress, Dr JÃ¶rg Reinhardt, Chairman of the Board of Directors of Novartis, stressed how important these diseases are to his company and referred to over 40 research projects currently underway. Other figures also highlight this change. In the USA there are now more than 450 approved orphan drugs and a further 450 are being developed.

Today, other problems are thus coming to the fore, such as the quality of research projects. In order to achieve excellent research results we not only need to apply the latest research methods, we also need good partnerships with patients and their families, foundations, authorities, universities and industry. « This is why congresses such as RE(ACT) are extremely important as they enable new networks to be established », according to Yann Le Cam, CEO of the Eurordis European patient organization. The new « RE(ACT) Community » platform was also introduced at the congress. This is a network aimed at exchanging knowledge, bringing experts together and funding new projects.

The congress organizers, Dr Olivier Menzel (BLACKSWAN Foundation) and Dr Pascale Vonmont (Gebert RÃ¼f Stiftung), are delighted with the results: « At this event we were able to cover all the key areas for improving patients’ treatment in the future â from the idea to the finished substance. This is what made this congress unique. »

RARE DISEASES: PATIENTS AND RESEARCHERS MUST WORK TOGETHER MORE CLOSELY

Almost 300 people took part in the first RE(ACT) Congress in Basel on the Novartis Campus to discuss research into rare diseases and the development of active substances to treat them. What made the congress unique was the interdisciplinary collaboration. Scientists from different disciplines â stem cell researchers, geneticists, biochemists, clinicians and pharmacists â exchanged information with patient organizations. In Switzerland about 500,000 people are affected by a rare disease.

Guy Morin, government president of Basel-Stadt, opened the congress: âFor most of the 6,000 to 8,000 rare diseases there are still no treatments to this day, and where there is a treatment, the costs cannot always be adequately covered.â Morin criticized the Federal Court ruling in 2010, when in the case of an elderly woman patient suffering from the rare Pompe disease, the court ruled that the treatment costs were too high and the health insurer did not have to cover the costs. âWe must under all circumstances prevent such a judgment being repeated or this decision rubbing off onto similar cases.â Morin also identified a need for action in another area: Compared with the US and the EU, where a law has been in place for years that successfully promotes the development of new medicines for rare diseases, Switzerland still does not have a comparable instrument in place. âWe still have a long way to go in Switzerlandâ, said Morin.

The podium was then taken by world leading researchers such as Prof. James R. Lupski, a pioneer in the field of genomic disorders, and Prof. Alain Fischer, a pioneer in gene therapy. Whether rare malformations of the face, rare forms of thalassemia, rare immune deficiencies, such as SCID or retinitis pigmentosa, an eye disease that leads to blindness, the unique feature at the RE(ACT) Congress was that specialists from different fields of research came together to address these diseases and treatments across the boundaries of their own disciplines.

Many patients with a rare disease are isolated

The cooperation between patients and researchers has already led to many a breakthrough, for example when comes to identifying a gene that is responsible for the rare disease. Most rare diseases are genetic in origin, which means that family trees are often consulted to find the gene responsible. Researchers can determine from the family trees how the gene is passed on through generations, who is affected and, in a next step, exactly what gene is involved.

The discovery of the gene marks an important milestone, but decades may pass before a medicine is developed. The next step is to look for active substances and then test them in a clinical study. Here, too, patient organizations play an important role, because they often have worldwide contacts with affected patients who are prepared to take part in studies. And these patients in turn often know their disease better than the doctor does.

Patient organizations today are also partly involved in the drug approval process, as shown by the example of the European Medicines Agency (EMA): A total of three representatives of patient organizations sit on this body, which decides on the approval of medicines for rare diseases.

âBut the most important and also the most difficult task of a patient organization for a rare disease is to collect as much money as possibleâ, says Sireau. Money that is needed to start research projects. After all, if the regulatory authorities are ultimately to give a substance the go-ahead, the most detailed possible knowledge of the disease is required and the safety and efficacy of the substance have to be clearly demonstrated. This takes many years of research and in the initial phase the money for this is often collected and made available by patient organizations. 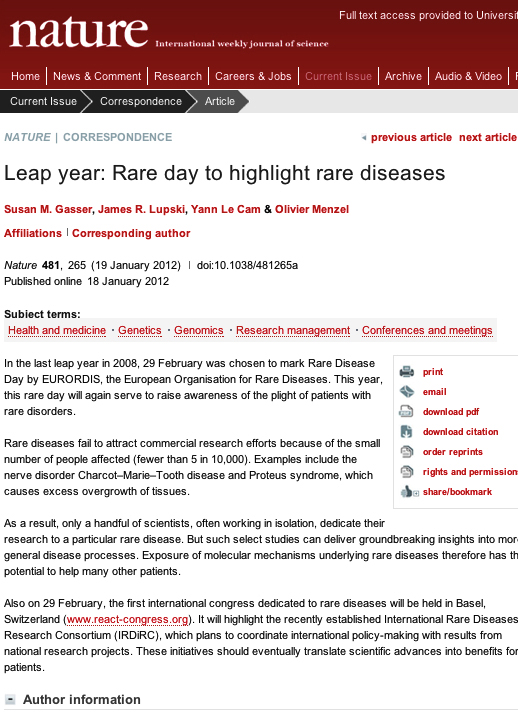