Basel will astonish you: its central location, first-class transport connections and infrastructure as well as the compactness of the city make Basel one of the most important exhibition and congress cities in Europe. All this, combined with a huge range of leisure activities, attracts hundreds of thousands of guests every year to Art Basel, the worldâs largest art exhibition, or to Baselworld, the worldâs leading watch and jewellery show, and many other top events. 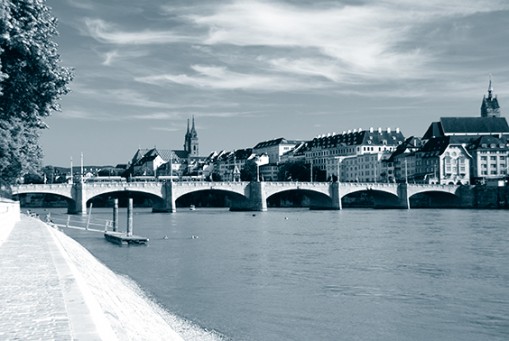 Even the mind needs a rest sometimes.Â Discovering Basel is a treat for the senses: all the worldâs cuisines are represented in the city, from the glittering gourmet restaurant to the takeaway around the corner. The city centre is also a gigantic shopping paradise and includes the traditional daily market in front of the City Hall. And the colourful, vibrant nightlife has something to offer for everyone.

Welcome to our neighbourhood. Let yourself be seduced away from the daily grind by the culinary pleasures and numerous leisure activities to be found at picturesque locations in the lovely surrounding countryside of Basel. The cantons of Baselland and Solothurn, the Alsace and the Black Forest together form a vast recreation area â you can quickly be in the Roman town of Augusta Raurica, at a feast in Alsace or in one of the famous wine cellars of Baden.

Even in the future, you can enjoy the past. Experience a journey through history in the Old Town of Basel: as one of the best maintained and most beautiful Old Towns of Europe, it is much more than a pretty backdrop. It is the heart of the city, where history can be sensed all around. Wander between imposing medieval buildings made of typical Basel red sandstone and past elegant patrician houses from the Baroque period.

Where architecture has found a stronghold. Draw inspiration from a unique mix of modern and historical architecture. Many contemporary buildings by worldrenowned architects such as Herzog & de Meuron, Mario Botta, Renzo Piano, Frank O. Gehry, Richard Meier, Burckhardt+Partner and others, prove that the tradition-conscious city also loves the new, and present an interplay between the exciting image of a tolerant international metropolis and the venerable Old Town.

The art of so much art. It is almost unbelievable how much art you can enjoy in Basel. You will come across it while wandering through the city as well as in almost forty museums. All tastes are catered for â from the world-renowned Fondation Beyeler to the Museum Tinguely, the Kunstmuseum Basel (Museum of Fine Arts), the Schaulager and the Doll House Museum. The sensational three-section theatre is also known well beyond the city limits.

In a party mood by nature. Celebrate festivals with the people of Basel as they happen: join the life-loving and enthusiastic residents as they celebrate carnival like nowhere else! It may last for only three days, but the city prepares for it 362 days of the year. Besides this, the keenly loved FCBasel football club or the Swiss Indoors Basel as one of the most important indoor tennis tournaments in the world and many festivals and occasions always give good reason for letting enthusiasm overflow. There is always something going on in Basel!

Sightseeing in Basel. You donât need to search for the sights in Basel. As you wander through the city, you will find them with every step you take. Whether you are in the picturesque Old Town or in the midst of world class architecture â the city offers something for every taste. In hardly any other city do 15th century buildings complement internationally renowned modern architecture to create such a dynamic yet harmonious cityscape.The narrow alleyways and hidden squares with over 180 fountains as well as the many century-old buildings and eye-catching sights such as the City Hall or the Cathedral combine to make Baselâs Old Town one of the most beautiful and intact of its kind in Europe.

Cathedral and Pfalz. Baselâs landmark must be the Cathedral. This former Episcopal Church was built between the 12th and the 15th century in romanesque and gothic style. Today, the square around the church is a meeting place and is often used for events. From the observation platform, known as the âPfalzâ, you can enjoy a spectacular view overlooking the Rhine, the Kleinbasel district, the Black Forest and the Vosges.

City Hall. The City Hall is the seat of the Basel government and its parliament. In the midst of the Old Town, it is particularly eye-catching with its red facade, the characteristic tower and playful frescoes. The oldest part of this imposing structure was built in the years between 1504 and 1514. In the centre court, you will find the statue of Munatius Plancus, the founder of the first Roman settlement in the Basel region. Basel Tourism offers regular tours through this historical building.

Ferries. A trip on one of the four ferries across the Rhine is not to be missed. Traditionally one calls the âFÃ¤hrimaaâ with a bell from the landingstage. Experience how time seems to stand still during the short crossing. Without sound, driven solely by the current, the ferries will take you to the other side of the river throughout the whole year.

Tinguely Fountain. In summer, it cheerfully shovels water, in winter, an enchanting ice sculpture: the unique fountain designed by the Swiss artist Jean Tinguely attracts tourists as well as passers-by, strollers, and Basel inhabitants wishing to enjoy their lunch break outside. With its central location in the city centre, it is the best starting point for a tour of the outdoor works of art of Basel.

Fondation Beyeler. With the construction of the museum building, designed by Renzo Piano, in 1997, the Beyeler collection has been made permanently accessible to the public. Around 230 works of art reflect the views of art collectors Ernst and Hildy Beyeler on the art of the 20th century.

Kunstmuseum Basel.The Kunstmuseum Basel is the oldest publicly accessible art collection in the world. The focus of the museum is on paintings and graphic art by artists from the Upper Rhine region from 1400 to 1600 and the art of the 19th to 21st century.

Theater Basel. The largest mixed-programme theatre company in Switzerland offers a broadly diverse repertoire, including dance, opera and theatre. The conferring of the award âOpera House of the Yearâ for both 2009 and 2010 shows the high quality of the productions of this theatre.

Classical music. You may have seen one of Baselâs famous orchestras in concert in your home country or on tour either elsewhere in Switzerland or abroad. The internationally-renowned Basel Chamber Orchestra and Basel Symphony Orchestra perform classical works at the highest level.