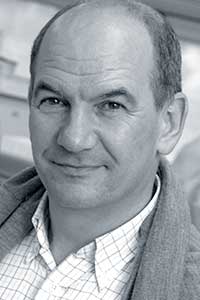 Marc Peschanski,Â Scientific Director I-STEM (INSERM/UEVE 861, AFM), founder and scientific director of I-Stem is a medical doctor in Neurosciences. Entered at INSERM in 1982, he first worked on the neurophysiology and anatomy of pain in Paris and San Francisco. From 1985 his work was oriented towards the study of neuroplasticity and transplantation of foetal neurons, with which his team conducted the first clinical studies in France, starting in 1991 in patients with Parkinsonâs disease, and the first world trial in Huntingtonâs patients from 1996, followed by a European study of Phase II in a hundred patients, currently in 4 countries.

Co-founder of the Clinical Investigation Centre at the Henri-Mondor Hospital and to its associated Biotherapy branch, he was also a founder of the European neurotransplantation Network (NECTAR) and its first chairman in 1991-92. He has coordinated several European research networks for gene therapy and cell therapy of neurodegenerative diseases, as well in most recent years pluripotent stem cells. He currently coordinates the Scr&Tox network of FP7.

The Institute for Stem cell Therapy and Exploration of Monogenic diseases (I-Stem), has been created the first of January 2005. It is a centre for research and development, dedicated to the development of treatments based on the potential offered by Stem cells and applicable to rare diseases of genetic origin.

Defined by three key words, âtherapeuticsâ, âmonogenic diseasesâ and âstem cellsâ, the activity of I-Stem extends from basic biological research and pathological mechanisms up to the transfer of new therapies to clinical research.

The objective of I-Stem is the development of treatments intended for monogenic diseases, founded on the strong potential of stem cells for substitutive and regenerative therapies. A second original objective of I-Stem is the development of cell models representative of pathologies on the basis of human embryonic stem cell lines each carrying a mutant gene associated with a given disease. These should help elucidate mechanisms of pathogenesis, and consequently, reveal possible therapeutic targets. These models can also be used as a basis for screening compounds libraries in order to discover new potential drugs.