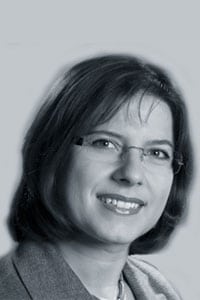 Prof. Anita Rauch studied Medicine at the University of Erlangen-Nuremberg, Germany, where she also received her medical specialization for Human Genetics in 2000. In 2009 she was appointed to head and chair the Institute of Medical Genetics of the Medical Faculty of the University of Zurich. Her long-standing research interest systematically addresses the genetics and pathomechanisms of developmental disorders with special focus on disorders with intellectual disability or growth alterations. During recent years her research group was able to identify the underlying causes of several rare disorders such as Anauxetic dysplasia, Primordial dwarfism type MOPD II, Matthew-Wood syndrome, Short-Rib-Polydactyly syndrome type II, Pitt-Hopkins syndrome, and MEF2C-related intellectual disability, and also contributed significantly to the clinical and molecular understanding of syndromic congenital heart defects. Her group was also the first to investigate the usage of SNP arrays for molecular karyotyping in patients with developmental problems. Anita Rauch is founder and editor-in-chief of the novel Journal Molecular Syndromology, and associate editor of the European Journal of Human Genetics. Anita Rauch was awarded with the John Opitz Young investigator award in 2003, the Carl-Thiersch award of the University of Erlangen-Nuremberg in 2004, the annual scientific award of the German Society of Human Genetics in 2008, the Sir Hans Krebs award in 2008, and the Wilhelm-Vaillant award in 2009.