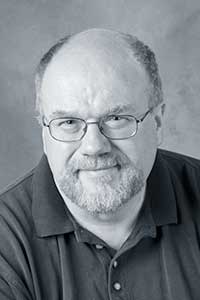 Colin Stewart received his D.Phil from the University of Oxford where he studied interactions between teratocarcinomas, the forerunners of ES cells, and early mouse embryos. He was the first to show that mouse chimeras can be produced by aggregation of EC and ES cells with 8-cell stage embryos, a now widely used technique in experimental mouse genetics. During postdoctoral work with Rudolf Jaenisch he showed EC cells and early embryos have a powerful mechanism, associated with de novo DNA methylation at transcriptionally silencing retroviruses.Â  Subsequently as a staff scientist at the EMBL he was instrumental in discovering the role of the cytokine LIF in maintaining mouse ES cells in an undifferentiated state. There he also initiated an interest in the nuclear lamins and nuclear architecture.Â  Following relocation to Hoffman-La-Roche, he showed that, paradoxically, LIF was not essential for embryonic development. Rather LIF, produced in the uterus, was essential at regulating embryo implantation. In 1996, he moved to the ABL research program in Frederick, Maryland and in 1999 was appointed Chief of the Laboratory of Cancer and Developmental Biology at the National Cancer Institute. Since June 2007 he has been Research and Assistant director at the Institute of Medical Biology at the Singapore Biopolis. His current research interests centre on the functional architecture of the cellâs nucleus and the lamins, in stem cells, epigenetics, regeneration and disease.