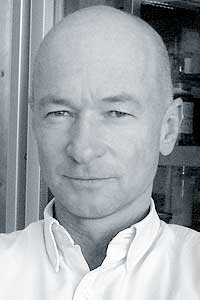 Born in 1956, Didier Trono obtained his M.D. from the University of Geneva in 1981. After completing a clinical training in pathology, internal medicine and infectious diseases in Geneva and at Massachusetts General Hospital in Boston, he joined in 1986 David Baltimoreâs laboratory at the Whitehead Institute for Biomedical Research of MIT as a post-doctoral fellow. In 1990, he moved to the Salk Institute for Biological Studies of Jolla to launch, as an assistant professor, a center for AIDS research. Promoted to associate professorship in 1995, he returned two years later to the University of Geneva as a full professor within the Department of Genetics and Microbiology. He took the head of this department in 2000 and, a year later, the presidency of the Basic Sciences Section of the Faculty of Medicine. In 2004 he joined the Ecole Polytechnique FÃ©dÃ©rale de Lausanne (EPFL) as dean of its newly launched School of Life Sciences, a position he held for eight years. Didier Tronoâs past research has focused on interactions between viral pathogens and their hosts, and on exploring genetics from both fundamental and therapeutic perspectives. This led him to epigenetics, the current topic of his investigations.