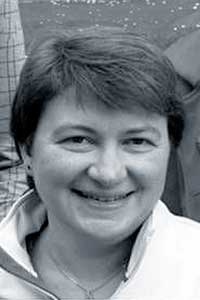 GisÃ¨le Bonne PhD.Â Â research interest focuses on the analyses of skeletal and cardiac striated muscles in normal and pathologic conditions. She performed PhD thesis (1990-1994) on the human cytochrome C oxidase complex during development and in mitochondrial myopathies. To complete her training in genetics, she went to Ketty Schwartz lab for my post-doctoral training where she identified the first mutation in the MYBPC3 gene encoding the cardiac myosin binding protein C, responsible to familial hypertrophic cardiomyopathy (1995). Since 1996, date at which she obtained a position at Inserm as senior researcher, she conducted her research program on the genetics and pathophysiology of Emery-Dreifuss muscular dystrophy (EDMD). She identified the first mutation of LMNA gene encoding Lamins A/C (1999). Mutations of this gene have been since linked to wide spectrum of disorders, the Laminopathies. Her research program has evolved with time and results towards genetics and pathophysiology of Laminopathies and their related disorders and to reach now the genetics and physiopathology of several neuromuscular disorders, as she is now leading a team of 20 persons working not only on EDMD, but also collagen VI related myopathies at the Myology Institute (Paris, France). The field of laminopathies has grown over the years, and is now a quite competitive and simulating research area. Her team has created 2 knock-in mouse models reproducing LMNA mutations identified in patients, models that mimics quite well some of the human disease features and thus represents unique tools to test therapeutic strategies. GisÃ¨le Bonne is vice-chair of the French Society of Myology, member of the European NeuroMuscular Center (ENMC) research committee, and of the World Muscle Society (WMS) executive board.