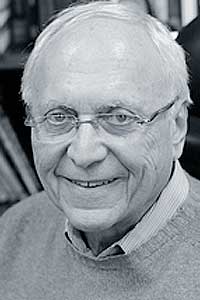 Robert D. Goldman, PhD, is the Stephen Walter Ranson Professor and Chairman of the Department of Cell and Molecular Biology at Northwestern University Feinberg School of Medicine.Â  He is an authority on the structure and function of the cytoskeletal and nucleoskeletal intermediate filament systems. He and his colleagues have published over 240 scientific articles.Â  His work has led to a number of honors and awards, including an Ellison Foundation Senior Scholar Award in human aging and a MERIT award from the National Institute of General Medical Sciences.Â  Dr. Goldman is a Fellow of the American Association for the Advancement of Science, and served on its board of directors from 1997-2001.Â  He has held numerous positions in the scientific community, including organizing meetings and editing monographs and lab manuals for the Cold Spring Harbor Laboratory and has served on review committees for the American Cancer Society and the NIH. He was President of the American Society for Cell Biology and of the American Association of Anatomy, Cell Biology and Neuroscience Chairpersons. Goldman founded and for many years directed the Science Writers Hands On Fellowship Program at the Marine Biological Laboratory (MBL) and served on the MBL Board of Trustees, as Director of the MBLâs Physiology Course and wasÂ  Director of the MBLâsÂ  Whitman Research Center.Â  He is an Associate Editor of the FASEB Journal, the Molecular Biology of the Cell and Bioarchitecture.